The Calculus of Life and Death - The Shalit Conundrum 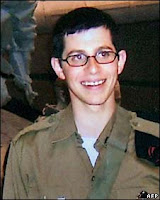 When Nachshon Wachsman was abducted, by Hamas militants in October 1994, Israelis held a collective breath. All eyes were trained on the video that his captors released. "The group from Hamas kidnapped me," said the quietly spoken 19 year-old man. "They are demanding the release of Sheikh Ahmed Yassin and another 200 from Israeli prison. If their demands are not met, they will execute me on Friday at 8 P.M."

Twenty four hours before the ultimatum ran out, prayer vigils were held across the globe. Over 100,000 people from all segments of Israel's public converged at the kotel to pray Wachsman's safe return home.

At the same time, behind closed doors, Israel's Prime Minister, Rabin, authorized a military rescue operation to free Wachsman who was being held in a village minutes away from the Wachsmans' home in the Ramot neighbourhood in Jerusalem. The military operation ended in disaster. In the course of the raid, Wachsman was killed as was Captain Nir Poraz, the military team's commander.

The country was in shock. According to Leah Rabin, Rabin broke down in tears when he heard of the failed rescue attempt.

We are now in March 2010. It is almost four years since the capture of another Israeli soldier, Corporal Gilad Shalit, who was abducted, also aged 19, in a cross-border raid by Hamas on the 25th of June, 2006. Ever since, Shalit has been held captive in an unspecified location within the Gaza strip.

Hamas has expressed a willingness to negotiate the return Shalit for a price - a very heavy price. It includes the release of hundreds of prisoners many of them with blood on their hands, some of whom are serving multiple life terms. "Hamas's demands have reached such proportions that in our assessment, no Israeli government could accept" announced Justice Minister Daniel Friedmann.

In November of 2007, Israel launched a ground invasion into Gaza. The military offensive was launched with the aim of preventing rocket fire which had continued from Gaza into Israel, but many of the troops went with another, ulterior, agenda: to free Shalit.

In October, last year, eyes in Israel were riveted to television screens when Shalit's captors released a video clip showing him, gaunt and uncertain, delivering a rehearsed message. That, too, carried a price tag: two and half minutes of video footage in exchange for the release of 20 Palestinian women prisoners from Israeli jails. There are no free lunches in the Middle East.

Once again, Israelis are experiencing a surge of unity and solidarity of purpose. And they come from all sections of Israel’s public. This month Israeli Arabs from Kfar Kassem protested outside the Egyptian embassy in Tel Aviv, demanding Shalit’s release. “Gilad is like a son to me” said Malik Faraj, the demonstration’s organiser.

Indeed, Gilad Shalit, like Nachshon Wachsman, is no longer just his parents' son; he is now the nation's son. A symbol of Israel's struggle for survival. But also of a nation's moral, legal and emotional compass. Israelis across the board are grappling with the question: what to do to bring him home safely. It is the topic of opinion columns, the agenda in political forums, the centerpiece of Friday dinner discussions and a driving force of public campaigns.

Stickers and highway banners demanding his release, have appeared across the land. In the ether, websites have appeared spawning petitions for Shalit’s release and discussion forums have sprung up, connecting thoughts and opinions across the entire globe. Esther Wachsman, Nachshon Wachsman's mother waded in the debate when she said that she would support releasing prisoners who had a hand in her son's abduction in exchange for Shalit's freedom.

“Israel is obsessed with Gilad Shalit in a way that no other nation in history has been obsessed with a prisoner of war,” says Haaretz columnist, Ari Shavit.

In the diplomatic arena, private and public demands have been made to secure Shalit's safe return home. A French citizen, Shalit was the subject of discussion between President Sarkozy and Hamas representative when the French President interceded on Shalit's behalf and delivered a letter written by No'am Shalit, Gilad's father, to Gilad.

How should Israel proceed? Public opinion is divided on whether negotiating with Hamas is the way forward. Principally, the argument goes, the risk of giving in to their demands will pave the way to many future abductions. On the other hand, Israel's ethos, a source of immense national pride, dictates that 'no soldier is left behind'.

Israeli media has been orchestrating, and to a large degree swaying, this debate, says senior political journalist, Yaron Deckel. “The media is going for the lacrimal glands; highlighting Shalit's family personal plight and promoting their agenda while, at the same time, ignoring the opposition camp and not giving voice to their anger and fears of the ramifications of a mass hand-over of murderers and terrorists in exchange for Shalit's return. In that sense, we have failed in our job to present a fair and balanced account.”

Shimon Shiffer, political affairs correspondent for the Israeli daily Yediot Ahronot, agrees, but only partially. "While it is true that the media is capitalising on a tear jerker, the public is divided on this issue. The opinion polls reflect an ever changing shift in attitudes."

The video of Shalit in captivity, he says, sent public opinion into a tailspin. "It put a lot of pressure on Netanyahu. The public said to him: ‘you must make concessions’. And despite Netanyahu’s professed intransigent stand on negotiating with terrorists, he yielded to the pressure.”

A few months ago, the pressure led to what appeared to be breakthrough. The media reported that a prisoner exchange for Shalit was imminent. Netanyahu almost relented to the demands made by Hamas, but at the last minute he reneged. He deemed the price too high.

Shiffer agrees: "No country and no government would give in to such demands. The terms and conditions were too high - too dangerous for Israel." The current situation puts in focus the dilemma at the heart of the matter; a country sensitive to human life and bereavement. "Despite the official stand”, continues Shiffer, “Israel, has made numerous deals in the past. We are a small country and the relationship toward citizens of the country who are kidnapped or missing in action is different. Heads of state here find it hard to face the families and public opinion on these matters. The Jibril deal is a case in point. (In 1985, Defence Minister Rabin ordered to free 1100 terrorists in exchange for 3 Israeli soldiered from the first Lebanon War – deal he later said he deeply regretted). In the US, they refuse to even meet with the families of MIS."

Indeed, successive US administrations have steadfastly refused to countenance negotiating with terrorists under any circumstances, When US Secretary of State, Condoleezza Rice, came to Israel and was asked to intervene on Shalit's behalf, she refused. "We don't give in to terror" was all she said.

It is difficult for those living in Australia to imagine, or understand– depending on one's background - what Shalit's capture means to Israelis. Nothing compares. Not baby Azaria's disappearance in the Outback; not Aussie PM, John Holt's mysterious vanishing in the sea. Not even Australia's Balibo Five who ventured into East Timor to report on Indonesia's military incursion, and returned in body bags. True, last October, the Upper House of the NSW Parliament unanimously passed a resolution calling for Shalit's release, (the motion was tabled by MP Chris Hartcher, representative for Terrigal), but the average dinki-die Aussie would have no inkling who Shalit is or what the debate is about.

In light of Israel's secret service, Mossad's, alleged involvement in the forging of Australian passports to facilitate the assassination of Mahmoud al-Mabhouh in Dubai, Australia may distance itself from Israel and refrain from pursuing Shalit's release from captivity. Already Australia, which has traditionally been one of Israel's strongest allies, has opted to abstain from a UN resolution demanding that Israel be investigated for possible war crimes committed during the assault on Gaza in December 2008. Three months previously, it voted against a similar resolution.

Gilad Shalit has been held captive for almost four years. The counter on the website dedicated to his release (http://giladshalit.fr) keeps record. So does Israel, a country caught in the terrible conundrum between a desire to bring back its son at all cost, and weighing the cost; doing the terrible arithmetic of life now and death. Because it is not always possible to plan, or presage, how things will pan out at the intersection of military and diplomatic bureaucracies, international politics, and in the fog of battle.

http://giladshalit.fr
Posted by Ori Golan at 17:24