Uri Geller - A view from a spoon 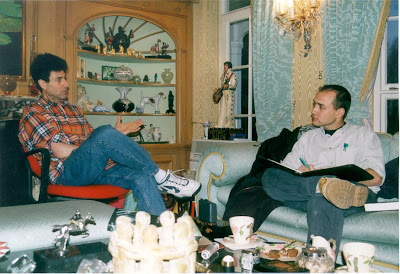 "From Reading Station ask any taxi driver to take you to Geller’s home." That was the advice that Uri Geller dispensed when we arranged to meet. In the event, my taxi driver, an elderly man, did not know where Geller lives (nor, I suspect, who Geller is).

When I gave him the address, he had to look it up in his road map. Eventually we made it to Geller’s home, standing at a distance behind a tall iron gate on the bank of the river Thames. Uri Geller looks significantly younger than his 55 years. A strict vegan, he is in trim shape and in good health. He greets me with a firm handshake and ushers me into his living room.

The glass coffee table is teeming with objects of curiosity: figurines, stones, vases, crystal balls and statuettes. The walls are adorned with paintings, portraits and photographs. He points to a hanging bike on the wall. It is a bike that belonged to the late cyclist Bruce Beresford, who asked Geller to help him break the world record. We talk about the book, Uri Geller: Magician or Mystic, by Jonathan Margolis.

The book traces Geller’s life from the time he received his powers by a flash of light from aliens, continues with his first bent spoon while eating mushroom soup at home in Tel Aviv, and follows his career right up to his current life in England, many spoons later. Exactly why the readers need know about Geller’s first sexual experience (with a prostitute, in Cyprus) is unclear. At some point, the story transforms from a biography to a hagiography. Geller recommends it warmly.

But Geller isn’t just written about. He himself writes. Quite a bit, in fact. "I am a great writer", he assures me. He writes a weekly column for the Jewish Telegraph and for The Face. "I also write fiction," he reminds me, lest I forget. "My books are excellent. ‘Ella’ for example is being turned into a film."  Critics, however, have failed to discover Geller’s writing genius. He still anguishes over a scathing review he received in the Jerusalem Post for his novel ‘Ella’. "I am not accepted by the intelligentsia," he explains. "They think Uri Geller shouldn’t write books. The publishing world is working against me."

The thought that the journalist - Dennis Eisenberg - could genuinely have not liked ‘Ella", does not cross his mind. This is not the first time Geller sees himself as a victim of a character assassination. He still recalls that famous article in Ha’olam Haze.

"It came out with a huge headline ‘Uri Geller is a fraud’. It really gets you here" - he points to his heart. "I left Israel out of disappointment. Because I am not a magician, I couldn’t change my repertoire and my act was limited. In 1971 I noticed that the crowds were dwindling. Suddenly I found myself performing in sleazy nightclubs in Ramle, or Lod. People didn’t even notice me."

In other words he left because he couldn’t make more money.

Geller’s wealth is a source of speculation. He likes to recall how he eked out a living as a construction- site worker in what is today the Beit El Al building in Tel Aviv. Fortunately, he can look back on these times now. "I am not a particularly wealthy man" he says in all seriousness. He refuses to disclose any figures, yet his palatial home has been estimated at £12M and the opulent lifestyle he leads suggest that he will not be asking for state hand-outs in the foreseeable future. But his wealth is just one manifestation of his megalomaniac character.

The zeal in which he pursues his detractors in the courts bears testimony to a litigious character which, after so many years, is still plagued by insecurity. The list of lawsuits Geller has initiated is staggering. He sued magician James Randi for claiming he is a fraud; he pursued Times magazine in the courts for featuring a metal bending performer in an advertisement, claiming this effect was his trademark.

Last year, he launched a libel action against Prometheus Books for allegations that he was dishonourably discharged from the Israeli Army. The company Menintendo was also sued by Geller for creating a toy character which, he claims, bears resemblance to him and undermines his reputation. In defense of his endless legal wrangling, Geller says he is simply protecting his good name and reputation. "It’s not what they think about me, it’s what they say about me. Let me put it to you this way: would you not sue anyone who wrote libelous things about you?" He does not wait for an answer, so I assume it’s a rhetoric question.

A large chunk of his day is taken up with answering emails. He receives hundreds each day. They come from all over the planet, and he loves getting them. You can send him one. His address is: urigeller@compuserve.com. He shows me a stack of print-outs of e-mails which he ‘personally reads’. They are from fans, lost souls and eccentrics. "I recently got an e-mail from a guy in the US who was diagnosed HIV+, so I called him up and told him: always be optimistic; believe in yourself. He was amazed to find himself talking directly to Uri Geller!"

"My website is non-commercial; it’s educational," he declares. I later surf his site and wonder whether he was being ironic. It is nothing less than an on-line Geller shopping mall. You can buy his Mindpower Kit (‘affordable to everyone and also available in Portuguese’); or his book Mind Medicine (also available in Slovenian, Hungarian, Greek, and Japanese). You may prefer to purchase crystals which Geller himself has touched. In fact you can spend the best part of the day either buying Geller products or admire the wonderful things he can do. Read how ‘Uri changes the colour of a flower; Uri stops the Olympic flame; Uri’s ten steps to happiness; Uri’s beautiful paintings…’ and the list isn’t exhausted - only exhausting. According to estimates – that is, Geller’s estimates - the site receives more than 400,000 hits a day.

One of the many peculiar aspects about Geller is that he doesn't handle money. He claims not to have used credit cards or written a cheque for over 30 years. Shipi, his brother-in-law, does these mundane things, while Geller gets on with the more spiritual and creative aspects of life. Recently Geller urged British television viewers to place their hands on a flashing image of English footballer David Beckham's broken foot to speed up his recovery, in time for the World Cup. It worked, of course.

Painting is now his passion. He designs plates for Poole Pottery and one of his designs is included in the booklet for the new Michael Jackson CD. His friendship with Michael Jackson, is by now one of the most famous friendships. It started when Geller was visiting another friend, Mohammed Al Fayed (better known as Princess Dianna’s would-be-father-in-law- maybe). Jackson called Fayed for a chitchat when Fayed said: 'Guess who I've got with me? Uri Geller!'. Legend now has it enshrined that Jackson screamed, 'Oh, Uri Geller!'. Fayed handed over the phone, and the two are now best friends. Such good friends that Jackson appeared – two hours late – as best man at Geller’s wedding in March, when Geller reaffirmed his vows to his wife Hannah in a star-studded Jewish ceremony. Indeed, Geller thrives on celebrity.

In the course of our interview he mentions that he has starred in countless TV specials, was a friend of Jacky Kennedy, met with English football manager Glenn Hoddle, talked to John Lennon; had a chinwag with Elton John, was invited to fly with Richard Branson … and the inventory continues. Geller has never shied from politics.

Recently he has expressed his gripe over the boycotting of the Israeli academics by Prof. Mona Baker. He has also expressed an interest in partaking in Israeli politics. "It’s a very compelling idea. There’s no doubt in my mind that if I go back to Israel that I would do well." Geller still holds on to his Israeli passport. "I am Israeli and am proud of it. I don’t go to synagogue, but at the end of the day I am a religious man. The fact that I don’t wear a Kippa, doesn’t mean anything."
At the end of the interview I hand him a spoon and a ladel. He gets a bit irate over the ladel but obliges with the spoon. He strokes the spoon, and…yes, dear reader, the spoon bends. And it keeps bending well after he lets go of it and lays it on the table. He autographs the spoon. But, by this time, the question whether Uri Geller can bend spoons without trickery appears trivial. Uri Geller the person, is much more interesting. It is not his intellect, or his books, not even his business acumen which have made him rich. For all his self-adulation, Geller has made his millions by bending spoons and stopping watches. No other career has ever taken off. He is a grown man with child-like qualities; a Peter Pan on an ego trip; a psychic whose extraordinary powers must be universally acknowledged. And nothing else, or less, will do. To this end, he will blow his own trumpet, extol his own virtues and sing his own praises. Because he knows Uri Geller best.
Posted by Ori Golan at 20:44

Haha, this is great.