Literacy gone to the dogs.

Australian school children with reading difficulties are getting help from volunteer assistants. And when they get it right they don’t receive a gold star from these assistants, but a lick in the face. Ori Golan 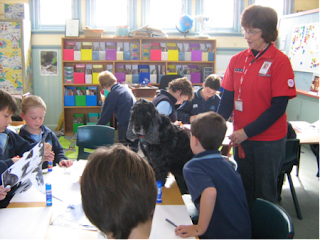 When I was seven, I moved with my family to Britain from Israel. Overnight, I suddenly found myself in a new country where people spoke a language I did not understand. I still remember my very first day at George Elliot Primary school in North West London. I was in shock. I became silent, withdrawn and morose. Then, I became irrascible.

One day our form teacher, Miss Pearson, walked into the classroom accompanied by Watson, her beautiful, good natured yellow Labrador. The kids all squealed with delight as Watson ran from one desk to the next, waiting to be patted. Miss Pearson asked me if I would take her dog for a walk around the school. I nodded. Watson and I bonded immediately. I became his regular walker. And talker.


When no one was looking, I would talk to Watson in my rudimentary English. I knew he only understood English so there was no point speaking to him in Hebrew. Watson never criticised or corrected me and I could see he understood what I was saying to him. For a whole school year I chatted to him. It did not take long for my confidence to soar and soon I was chatting away in English like any other child in the class. I knew that it was thanks to Watson, my quadruped friend and confidant. What I did not know at the time - and only found out many years later - was that it was my mother who had engineered this relationship, together with Miss Pearson.

Forward-wind now four decades and hop over to Australia.

Watson’s image sprang to mind recently when I heard about an extraordinary project being implemented in Australian schools, designed to assist children who have been identified as having specific reading requirements, using dogs. The program was initiated by Glenda Bridgman, a primary school teacher of 20 years, who would take her black cocker Spaniel, Hamish, with her into the classroom. “On the days that Hamish was present” she recalls, “I noticed a significant change in the dynamics of the children. Their social and learning skills improved noticeably.”

She resolved to pursue the idea of using dogs as in schools to help young people.

Three years ago, Bridgman secured funding to undertake a research project in the Occupational Therapy Department of Deakin University in Melbourne. And so the Classroom Canines project was conceived.

The guiding principle behind the project is decidedly simple and, at the same time, it is remarkably effective. Volunteers bring their assistance dog and, together, they spend time with a child with specific reading concerns. In the course of their meeting, the child reads aloud to the dog. According to Bridgman, the act of reading to a dog has an astonishing effect on the young reader. “These children find reading hard and often frustrating”, she explains. “By giving them the opportunity to read to a dog, the exercise becomes non-threatening and even enjoyable for them.”

The volunteers, Bridgman notes, also engage in informal chats with the children - a strategy which cements trust and improves self-esteem, motivation, socialisation and communication. “The time students spend with the dogs”, she continues, “often leads to these students opening up and discussing non-curriculum related material. They tend to bring up things about their family or something that is happening at home so a lot of emotional stuff will come up.”

Holly was a timid little girl when Bridgman first started working with her. “She was a very reluctant talker” recalls Bridgman. “She would not leave the classroom and couldn’t go anywhere without the teacher. If the students had to leave the room Holly would hang on to the teacher. She had to be escorted to every classroom”.

Then Hamish stepped in.

“We started by asking her if she would take Hamish to the library and she held the lead with me as we took him to the library” recalls Bridgman. “Next, we asked her if she could take Hamish and deliver something to another teacher, which she did. We repeated this each time until, finally, she would go to the different classrooms she needed to go to during the week, without fear or hesitation.”

Holly’s reading was also an issue. She would get flustered when asked to read and become nervous whenever she came across a word she did not know. “When I sat down with her and she read to Hamish she overcame her apprehension and her true reading capacity came to light. Hamish’s presence put her at ease and she was visibly more relaxed. She didn’t appear worried about making a mistake. Her class teacher was amazed to discover the full extent of Holly’s reading ability,” concludes Bridgman.

The volunteers in Classroom Canines project all have their favourite stories to relate. Barry has been working in the program with his German shepherd, Shadow for the past three years. “There was one little boy who was petrified of dogs”, Barry recalls. “He would panic whenever he saw a dog anywhere within sight.”

“We started off with bringing him close to Shadow but he wouldn’t come near him” continues Barry. “But gradually he worked up to getting closer to Shadow until one day he said “you hold the bite end” and he patted “the tail end”. What a breakthrough that was!” A few months later, this same frightened young boy was taking Shadow for walks around the school and would chat away to the dog.

Eleven schools were chosen for the Classroom Canines project program. Volunteers and their therapy dog visited local primary schools and sat with junior grade children to listen to them read to the dogs. The objectives of the research program were to ascertain whether there were benefits to the children - both emotional and educational - in having a Classroom Canine team present in the classroom. The project was such a success that researchers at Deakin University have sought permission to run the program as an ongoing Honours project so the program will be continually evaluated.

Bridgman describes in details the findings of this initiative, part of which consists of interviews with volunteers, teachers, principals, parents as well as the children who benefited from the project. “The only party not interviewed were the dogs!” she quips.

Not to worry; there are now many happy children able to read these amazing results to the dogs

Nice article. And Ori, I learn something more about you each time I read one!

what a beautiful dog this Shadow must be.