"People are constantly getting raped"

I have often wondered about books, films and plays which are said to be based on, inspired by, or reminiscent of, true events. What is the desired effect of such taglines on its audience? Is it important for – or even relevant to– the enjoyment or appreciation of the story? Or are such provisos commercially motivated; do true stories sell better and are they more of a crowd pleaser? 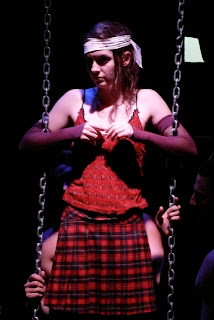 I was overcome by the same sense of wondering during the opening night of playwright Edna Mazya’s Games in the Backyard performed in a small theatre in Sydney. The play is said to be based on the gang rape that occurred in Kibbutz Shomrat in 1988 when a group of teenage boys repeatedly raped a 14 year old girl from the kibbutz, over several days. Eight teenagers were indicted but then acquitted when then-judge Lindenstrauss ruled that rape had "not been proven beyond reasonable doubt". In response, elements of Israel’s civil sectors went into a tailspin. Outrage over the verdict reverberated for days in newspaper columns, television debates and street demonstrations. The State Attorney's office, under heavy public pressure, appealed to the Supreme Court which overturned the verdicts and imposed jail sentences on three of the accused men.


The kibbutz came under intense critical scrutiny. The effect was to invalidate the presumed moral superiority of the kibbutz movement. It challenged the view that these were a bastion of collective responsibility, gender equality, friend­ship and respect for fellow humans; instead, they were portrayed as tight-knit communities attempting to close ranks, hide their skeletons and explain deviant behaviour within their numbers by pinning the blame on the psychological makeup of the victim.

However, none of these details emerge during the play. The characters all have Hebrew names and the crime takes place in a fictitious place called Ein Vradim, but this is as far as the ‘Israeli connection’ goes. This story could just as well be set anywhere else; in a school in Norway or a close-knit community in Bolivia. Or even here, in Sydney.


“The play is a very loose interpretation of the case”, concurs Israeli director Netta Yashchin. “[Playwright] Edna Mazya had no access to the files and it’s irrelevant where the play was scripted. The themes relate to Australia just as much.”
With minimal budget, props, space and cast, the play tells the story of the rape and the ensuing trial.

In the opening scene Dvori, a rebellious not-quite-15 year-old, is swinging on a swing, wearing a skimpy red tartan skirt which the wind blows to reveal her body parts. Enter Shmulik, a slightly nervous 17 years-old, with faltering speech and asthma. An awkward dialogue ensues where it transpires that he is ‘keen’ on Dvori but she repels his advances. Asaf, Sela and Gidi, pre-army teenagers, strut onstage: brash, macho, loutish.


This sets the scene which will carry the audience, transfixed, for the next eighty minutes.

The narrative plays on flashbacks which deftly shift, back and forth, from the scene of the crime – a deserted reservoir – to the court room where the young men are tried. The same four perpetrators also play the role of the defence counsel. Dvori herself alternates between the rape victim and the trial prosecutor.

Dvori is infatuated with Assaf, the group leader. It is he who lures her, humiliates her and ultimately eggs the others on. Shmulik, sensing what’s in store, tells Dvori to go home. “Shut your mouth! Deformed little dwarf, that’s what you are” she replies, leaving him angry and humiliated. He will go on to serve the longest prison sentence: three years.

The drama builds on dialogues replete with bravado and innuendoes; it plays on the evolving dynamics as the four boys react to the young girl’s naive, provocative and desperate attempts to win their affection. It continues in a highly charged, testosterone driven, sequence of dares and games in which T-shirts are stripped, Dvori is blindfolded and the situation steadily degenerates into its foregone conclusion.

The rape scene is carried out with minimal, suggestive poses. Dvori looks on with catatonic horror as her limp body is defiled. One by one, the boys partake in the abuse. All but one: Assaf, the ring leader, abstains. When it is over, Dvori is left writhing on the ground, whimpering. It is a harrowing scene, executed with consummate dramatic skills by actress Jessica Palyga.

While the drama is gripping, it is by no means faultless. The first setback is in the opening scene where the boys play Australian Football. This is jarring and incongruous. Most Israelis would never have heard of Australian Football (which may be mistaken for rugby), let alone play it. It would have been more plausible, and fitting, to give the four boys a basketball to play with, or, alternatively, assign them Aussie-sounding names. To a Hebrew-trained ear, it is also disconcerting to hear the name Vradim mispronounced by one of the characters who supposedly lives there. The transitions in time and place are clumsy and long; as the boys turn into a suit-wearing defence counsel, we are left waiting. The attempt to mitigate this by screeching-metal music fails miserably.

Games in the Backyard attempts to grapple with a very uncomfortable question: did the young girl lead them on? More bluntly put: did she ‘ask for it’ - inasmuch as a 14-year-old can?

“Why didn’t you scream, Dvori? If it hurt so much, why didn’t you scream?” asks the defence counsel. Dvori has no answer as to why she did not cry, or scream or shout. The defence council does. “You didn’t cry during the incident, because you wanted them” they tell her. They venture into what the prosecutor describes as “low territories”; where uncertainties lurk, doubts are sown and empathy for the accused is nurtured. They dig up salacious stories from Dvori’s past to portray her as a slut who was out to seduce ‘four fine Israeli boys whose only crime was that their hormones were functioning in a normal fashion’.

The prosecutor has the last word: “I agree with the counsels’ theory”, she begins. “Dvori’s a bad girl. She likes playing in back yards. She enjoys flirting with danger, violence and humiliation. That’s the kind of girl she is. […] So what? What does that mean? That she wanted three boys to have sex with her? And humiliate her? And treat her as if she was an object?”


The questions hang in the air, bereft of an answer, as the audience leaves in abject silence.

For Yashchin, whose theatre credits cover a gamut of genres, the actual physical rape is not the main event. “I was more interested in the psychology of the gang” she tells me backstage. “A story like that can help a lot of other people.”

“I think that a lot of people can find themselves in situations like that; it’s cathartic. People get raped all the time. Sometimes intellectually, sometimes sexually, sometimes emotionally. People are constantly getting raped.”