From Prison with Love 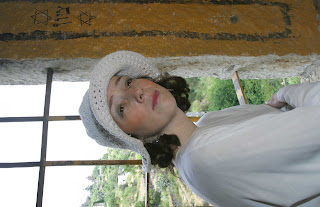 Last year, on the 4th of November, while Israel marked 12 years to the assassination of prime minister Yitzhak Rabin, frenzied preparations were taking place for a celebration in a top security prison in the country. It was for the circumcision ceremony of an 8-day old child, in accordance with Jewish law. During the ceremony, the name of the new born was declared: Yinon Amir, son of Larisa Trembovler and Yigal Amir, Rabin’s assassin.
"Yigal chose the name", explains Trembovler. "I wanted him to decide because his involvement with the boy will be very limited.

That is the least that can be said.

Amir is serving a life sentence for the slaying of the Prime Minister with no chance of parole. A bill passed by the Israeli parliament ensures he will have no recourse request a presidential pardon. A single daily telephone conversation and a twice-monthly visit is the sum total contact they are allowed.

Trembovler has a fragile, slightly quivering voice which she barely raises. She weighs her words carefully, as if each one could trip her up, or give away more than she intended. It is hard to imagine that someone with such a fragile voice could be so determined and self-assured.
It is equally hard to imagine why an intelligent, articulate 41 year old, who holds a Masters degree in Biology, and a PhD in Philosophy, would choose to devote herself to one of the most reviled murderers in Israel.

"After the assassination, I made contact with Yigal’s parents", she recalls. It was to express sympathy for what she terms ‘the character assassination’ they were enduring by the media. In time, she started writing to Amir in prison and so began their relationship. In 2004, after divorcing her husband, father to her four daughters, she and Amir decided to cement their relationship; they asked the prison authorities for permission to marry.

Their request triggered uproar in the country. "I’d rather go to Amir's funeral than his wedding," declared Yossi Sarid, then-leader of the liberal Meretz party.

When their request to marry was rejected, the couple outfoxed prison authorities by using a messenger and applying an old – and seldom used – Jewish practice which enables a couple to marry by proxy. Two years later, after protracted legal wrangling, their marriage was formally validated.

"Our life is fraught with struggles" sighs Trimbovler. Indeed, at every step in their joint lives they have had to fight, petition and appeal.

Next came their request for conjugal visits. That, too, was vigorously contested. Last year, after numerous court hearings, their request was finally granted and Amir now enjoys the same rights as any other ‘lifer’. Timbovler consequently fell pregnant and gave birth to their son at the end of October last year. A few days ago they marked his first birthday.

Amir has never expressed regret for his act, nor shown any remorse. Did his crime not shock her?

"My relationship with him is first and foremostly a personal matter. I am his wife," she says in a manner that does not invite further discussion. As the conversation wears on, she relents. "What happened is a terrible tragedy. He sacrificed himself because he felt he was averting a disaster. It was a political assassination, it was not motivated by greed or base cruelty; it was ideological. The Oslo accord have brought us tragedy and destruction, I think this is now recognised by many sectors in Israel, even those who initially supported the peace process."

In the Israeli media, Trembovler has been ridiculed and castigated. "They did their best to present me as a fruitcake" she chuckles in self-abasement. Still, her story with Amir attracts avid attention and voyeuristic fascination. In the lead-up to giving birth, her house was surrounded by the paparazzi; when she went into hospital, police mounted guard to keep journalists out. On the day of the circumcision, the media scram was hysterical. "We had to call for police reinforcement. I had never seen anything like it".

The Israeli media, she insists, does not really represent public opinion. There, the attitude is wholly different. "The public is very supportive. Sometimes people stop me in the street and say: ‘we are with you, be strong’".

Her impressions certainly seem to cling to facts. According to a poll conducted in Israel two years ago some 30 percent of Israelis expressed support for Amir to be eventually pardoned. This is a clear shift in public opinion.

I ask her if she thinks that, come a day, Yigal will be released. "I hope so but I think this question should be viewed in its correct context. All life prisoners in Israel are eventually released either as a gesture of goodwill or as part of prisoner exchange. He is in a category of his own, which is very unfair."

Her voice becomes insistent and it is audible that there is still much fighting ahead. Does she ever regret the path she has carved out for herself? "Oh no" she says. "I know it won’t be easy. But having Yinon is such a miracle and brings us so much joy. I feel that it is well worth it".
Posted by Ori Golan at 19:35