Suddenly the chimney was just a chimney. 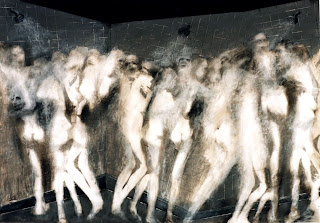 One was the daughter of Holocaust survivors; the other related to one of the most notorious Nazis. One wanted revenge; the other to purge her guilt. What happened when their paths crossed? Ori Golan talked to them.

Ruth Rich wanted justice. At 61 she needed healing for the pain, fear and anger which had haunted her from early childhood.

Daughter of holocaust survivors, her mother was raped by the nazis and her brother perished in the cremetoria of Auschwitz. When her parents died, she was left to grapple with their memories and suffering. "Those corpses whose souls hovered in that place between life and death were somehow living in me," she recounts. An artist by profession, Rich translated her pain to art and launched Redemption Through Darkness - an exhibition of haunting images from the holocaust dedicated to members of her family.

The sequence of events that followed were to change her life radically.

German-born Bettina Goering, 52, was fighting her own demons. Her life had been blighted by her family’s past. Her grandmother was an ardent nazi supporter; her grandfather’s brother was Hermann Goering, Hitler’s architect of the nazi death camps. Goering, the grandniece was burdened by her relation to the man who symbolises the annihilation of millions of Jews.
A mutual friend mentioned the exhibition to Goering and, soon after, Goering and Rich began corresponding by email. From opposite sides of the globe, standing on opposite sides of the historic divide, they found a common ground of pain and loss brought on by their families’ history.

Rich’s marriage broke down when her children were toddlers and she abandoned the family. It is a chapter she imputes to her unresolved family drama. As a child, she felt the only way she could communicate with her mother was through rage. "I was emotionally drained my whole life," she sums up.

Goering also had a troubled childhood. She, too, puts down the cause to much of her suffering to the dark legacy of her family history. She left home at 13 and in her early twenties suffered a series of mental breakdowns which saw her institutionalized in psychiatric hospitals. Then she did something extraordinary: she had herself sterilized. "It was the ultimate act" she says from her home in Santa Fe, New Mexico, where she now lives. "I wanted to end the family line. I did not want to bring monsters into the world".

The two women decide to embark on a journey of healing and reconciliation: the nazi and the Jew; the victim and the perpetrator. Goering and Rich. They arrange to meet at Rich’s home in Bangalow, NSW.

Bloodlines, directed by Cynthia Connop, is an extraordinary and confronting documentary which captures their meetings. It is psychodrama in slow, drawn out motion. There are harsh accusations, bitter tears, raw emotions and vivid pain. "I had a personal thing about her family who killed my brother" recalls Rich about Goering. "I had a big projection against the Germans. I was going to go all the way to get my stuff resolved".

"I want you to drop your German defense," Rich tells Goering in the film. "Show me those cold eyes that can kill."

"I look just like him," says Goering. "I look more like him than his own daughter. The eyes, the cheekbones, the profile."

There is something decidedly uncomfortable –almost voyeuristic – in watching Bloodlines. One gets the feeling of intruding on an intimate moment of reckoning. Or eaves dropping on a conversation of a deeply personal nature.

In one scene, Rich sits in front of a pile of cushions holding a photo of Herman Goering in Nazi uniform. Sitting on the opposite side and looking into the photo, Bettina pounds the cushions in what appears to be an act of exorcism. "Get out of me, leave me alone" she screams, shaken and tearful. "I want to be strong again", she sobs.

Did they not find the cameras intrusive?

"We were connecting with our feelings. The subject was so intense, we just focused on our feelings." recalls Rich. "Once we got into the process we forgot about everything else." Goering concurs: "it came from the belly. We were deep in it".

The documentary ends in a symbolic peace ceremony which the two women conduct. "It’s been a great journey, concludes Rich. Goering nods: "I feel safe now. We got through it."

"We wanted to make a difference to other people," explains Rich. "You know, if it was to have a healing value for just one person in the world, then we have done our job".

Producer Cynthia Connop also sees the film as a powerful healing tool: "It was always my intention to take their story out into the world so it may trigger possibilities of reconciliation for others. It doesn’t really matter whether it’s the Holocaust in your past, or other family legacies, I believe if we are willing to explore them and feel them as these two women did, there is hope for the future".

"It is happening all over the world" notes Rich. "Palestinians are sitting with Israelis. Groups are being set up for people to communicate. The recent apology by Kevin Rudd to the stolen generations was an admission that the past needs to be addressed honestly before we can move on". 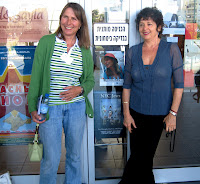 But it was only in October this year, when the film was screened in Israel, at the Jewish Eye Festival, that their journey came to an end. Both women experienced a turning point that finally put their demons to bed.

For Goering it was during the Questions and Answers slot, after the film. "I went in and there were a number of elderly people in the audience. They were at least 80 and they were holocaust survivors. They all cried and hugged me. I cried too and felt that it was all worth it. After that I felt I lighter. I was not totally involved any more. I was an observer".

For Rich, closure came on her last day in Israel: "I looked out of my hotel window in Ashkelon" she recalls, "On the left I saw a chimney. Every time I looked at the chimney, I felt immense pain. I had made a painting of exactly the same chimney. It was a chimney like that where my brother ended up. Then I looked into the right side of the window and saw a beautiful sea. I said to myself that from now on I am focusing on that. Then, when I looked from the sea back to the chimney, suddenly the chimney was just a chimney. My journey was done. I walked off and left it behind me".

Bloodlines was broadcast on ABC 1 Compass in September this year.
It was screened in Israel, as part of the Jewish Eye Festival, in October this year.
http://www.bloodlinesfilm.com/
Posted by Ori Golan at 19:43