Postcard from a Grieving City 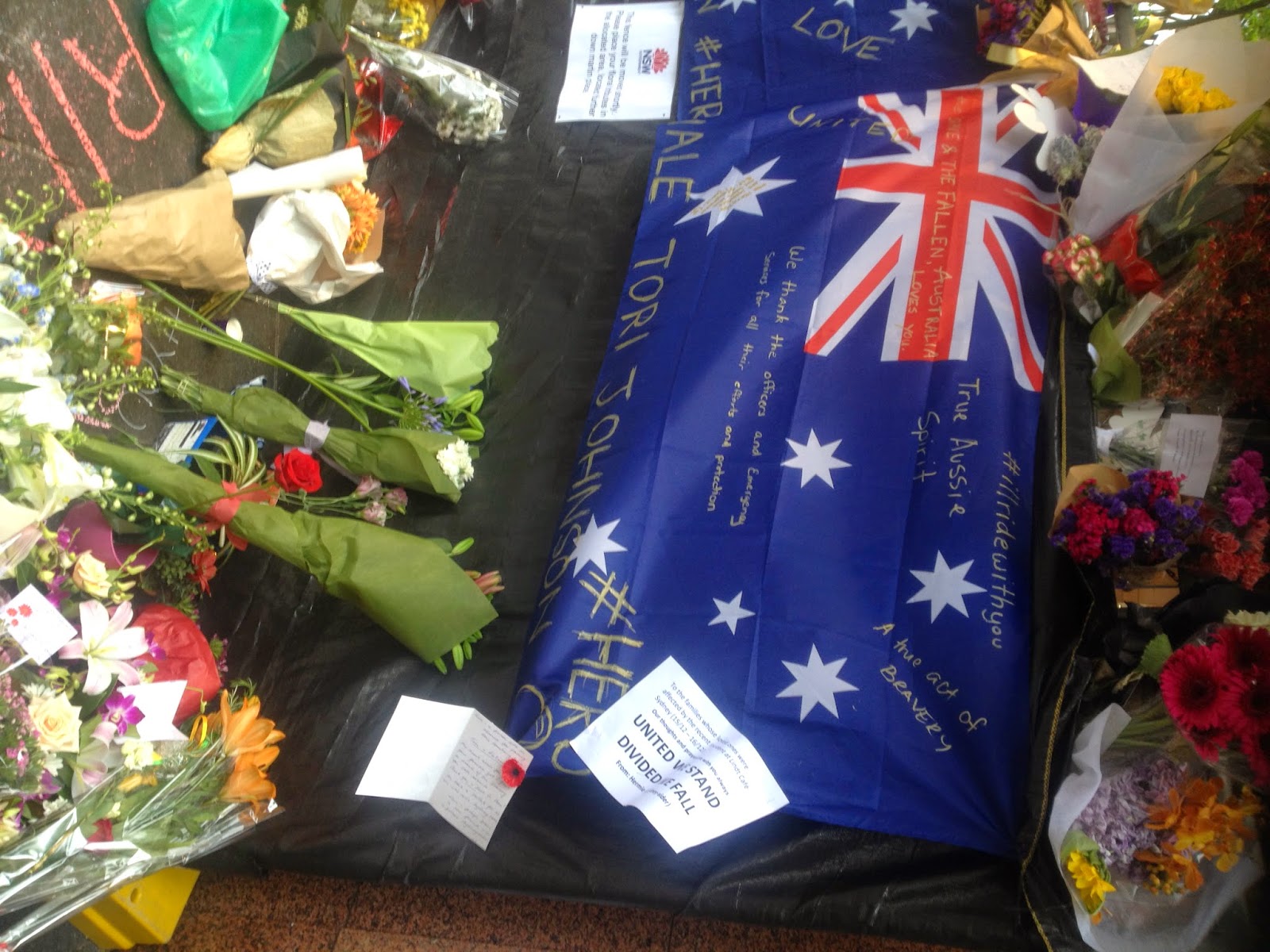 It has been a gruelling 48 hours in Sydney, as the city transforms from the safe haven we have always thought of it, to the scene of a most heinous crime.


A makeshift memorial in Martin Place for the siege victims is being continually moved to accommodate the expanding rows of floral tributes and cards.


I have lived in Sydney close to ten years now. This city has been my home by choice and I love it. I came here in January 2005 and I immediately fell in love. I love its freedom and its openness; I love its people, its cafés, its culture and its sun-blessed weather.

That it has become the number one news item across the globe saddens me beyond words. I have always enjoyed living in a city and a country ‘far away’ and out of the limelight. I feel proud to live in a city where office slickers go surfing after a day’s work, or steal off for a mug of hot chocolate in a nearby café during a lunch break. I love the city that offers night time entertainment beamed on office buildings. Or sculptures by the sea. I love the city that can shine pink on its iconic Opera House on Breast Cancer Day or close its thoroughfares to traffic for community marathons. I love the city that you can count on and be counted, regardless of your politics, origins or sexuality. I love the arrogance of its youngsters, the wisdom of its elders and the joviality of its workforce.


Two days ago, all this stood the most terrible of tests. And it didn’t help that the gutter press, namely Murdoch’s Daily Telegraph, did not think to wait and glean some facts, ascertain details or withhold inflammatory commentary. Its Armageddon-style front page headline had already asserted that ISIS had come to town.


I feared for our city. I feared for the very fragile human fabric that makes it what it is; accommodating, friendly and outdoorsy. And yet, despite the disgraceful tabloid bile, our city’s fabric remained intact. Prompted by a desire to share in their grief, thousands spontaneously converged on Martin Place, bearing flowers, cards and tears. They were there in silence, looking at the place where only a few hours previously two innocent Australians, Kartina Dawson a mother of three and Tori Johnson a handsome gay man, were killed by a gunman whose name I wish to forget and whose memory I hope will be forever erased.


But, in the cold light of day, in the midst of our collective stream of tears we rediscovered our city and its people held on tenaciously to their convictions; they hold on to their openness and generosity.


And these manifested themselves spontaneously, rapidly and like selflessly.


Aready early in the morining, a young Sydneysider with a username @sirtessa and a hashtag  #illridewithyou, offered to ride on public transport with any identifiable Muslims who were too afraid to head home alone in the context of the siege, fearing for reprisals. It was the number one global trending topic which prompted thousands of Sydney residents to offer their company and friendship to the Muslim community in a selfless show of solidarity.


Last night I went to Martin Place and reported on it for Israel Radio. I was deeply moved by the sight of so many people congregating outside Lindt Café . Thousands of words poured out. Written in cards, emblazoned on banners and scribbled on the ground. We do not fear & nor do we forget. United we stand. Divided we fall. As I looked on, my eyes welling, a stranger offered me a napkin. ‘Here you go, mate’.


I was encouraged greatly by this display of concern, affection and solidarity. It was truly beautiful.


Nothing good has come out of this senseless killing by an evil man, but I believe, in time, we will look back on this and remember this as our hour of unity and resilience, or as we say in Hebrew: our beautiful hour. Thankfully, as morning light emerged on our beautiful city, the facts dawned on us too. No, ISIS did not come to town as the Telegraph chose to report with ignorance and glee. We were visited by a despicable act of an evil man.


As an Israeli who has lived in this city for almost ten years and as a resident who is about to leave Sydney for a year of travel, what I will take with me is the sense of belonging; the knowledge that sanity prevailed in our city; that Sydney remains intact and that this truly is ‘the lucky country’.
Posted by Ori Golan at 08:11

What a beautiful post. It really struck a chord, and reminded me very much of London after the 7/7 attacks. I remember hearing that even Hindu colleagues, whose faces just fitted, felt scared travelling on the tube for weeks afterwards because of the suspicion. So it was pretty special to hear about the guy that offered to accompany muslems - Sydney does indeed sound like a great place.

a truly sensitive article. Just one comment, please, namely the barbarian that committed this obscenity may or may not have been sent by ISIS but he is a product of radicalized Islam, which IS truly evil.