Scent on a mission. 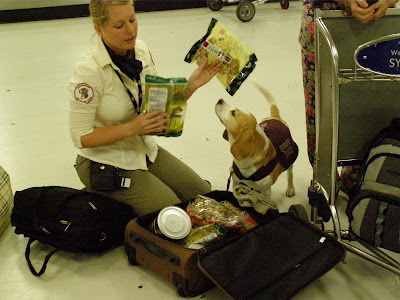 Concealed snakes, live bees smuggled in pens and an errant leaf in a pocket. These are just a few of the findings of quarantine detector dogs working around Australian airports. Selby is a dog who nose all about it.

"Come on Selby, let's go find it!" This gives the three year old Beagle the cue to dart around madly among luggage and passengers near the customs area at Sydney's international airport. A member of Australia's quarantine detector dog, Selby is one of eight dogs on duty this morning, trained to sniff out food or organic material being brought into the country. Her targets are meat, plant material, eggs products, birds, reptiles and bees.

The Australian Quarantine and Inspection Service (AQIS) is charged with protecting the continent from exotic pests and disease. And the risks are very real. During the 1990's, following an outbreak of papaya fruit fly in north Queensland, production loss exceeded $100 million Australian Dollars. The AQIS is also battling to minimise the spectre of an outbreak of foot and mouth disease similar to the one which took hold in Britain in 2001, which cost the UK's agriculture and food industries over £3.1 billion in damage. An outbreak of this magnitude in Australia is estimated to tip $13 billion of the gross domestic product and its consequences are projected to be felt for nearly 10 years after the event.

This explains why Australia has one of the strictest quarantine legislation in the world. Travelers arriving in Australia in possession of undeclared fruit or other food derivatives (including some Chinese medicine) are liable for an on-the-spot fine of $220 Australian dollars (£105). Concealing of smuggling prohibited items can result in significantly heftier fines as well a criminal record. Last year a student arriving at Brisbane airport was fined $6,700 (£3250) for trying to smuggle less than a kilogram of dried meat into Australia. Dogs like Selby are helping track down these unwanted items and are proving invaluable where x-ray machines and human inspections fail. And these dogs have their work cut out for them: Sydney airport brings in around 32 million passengers a year, making it the busiest airport in Australia.

Selby's handler, Olivia, is a young, friendly woman with a contagious laugh and a broad Aussie accent. We meet in an early morning hour at the arrival hall where she and Selby are about to check a flight that has just landed from Malaysia. "She is a bit like me" says Olivia of her dog, "a bit of a blonde who takes a while to wake up in the morning." She laughs and the dog looks at her, wagging her tail. They have been working together for two years as part of an eight-strong quarantine detection team. The quarantine detector dogs hail from many backgrounds, including animal shelters and private homes. After an initial assessment for suitability, they are put through a rigorous training program.

"We only use Beagles for this job" says Olivia, "because they are the most suitable breed for the friendly image needed for dogs working with a diverse public. They are friendly, calm and very cute. Beagles also have an extraordinary sense of smell and are able to isolate a target scent from among many others. Most people really take to them, but there are some cultures which dislike dogs and where it is considered acceptable to kick a dog. Our main priority is to keep the dogs safe. We try not to surprise passengers from behind, but will insist on the dogs being allowed to sniff their bags." Have you had any interesting findings during your time here, I ask her. "Heaps", she replies without hesitation. "I have so many! How do you pick and choose?

There was one case of a passenger who tried to smuggle in queen bees concealed in a pen and this was intercepted by one of our dogs. Another time, one of our dogs discovered live snakes on a person concealed in a pillow case wrapped around the leg. Quite often the dogs will detect something seemingly insignificant which an x-ray machine will not pick up. For a dog to find something small, like a leaf the size of a coin, that is the most amazing thing from the handler¹s perceptive. Quarantine detector dog are trained to sit when they detect a target scent. Their handler then proceeds to check the suspected luggage or person. However, sometimes the dogs will react differently, particularly if the scent is a new or interesting.

"This is where teamwork is essential; you need to be able to read your dog" explains Olivia, "Selby, for example, is not too good at sitting around meat ­ she just wants to eat it!" she laughs.When they discover and a target scent, the dogs are rewarded with a titbit. This is why the dogs must be food driven. "Food", continues Olivia,"is the primary reward, but we also have secondary reward, a pat or verbal praise, when they try and do something right, but don¹t quite get there." According to Olivia, different flights carry with them different smells and certain flights are a lot more exciting for the dogs than others. "For example, some dogs switch off on a NZ flight but become excited on a China flight, or one from the Middle East where there¹s a whole range of different smells. If they get bored, they tend to lose concentration and motivation so we throw in a training bag, or bring in other dogs because the dogs enjoy competing against each other".

The passengers from the Malaysia flight are now clearing immigration and Olivia has just given Selby the go ahead to go sniffing. I tag along behind them, trying to keep up with Selby as she races past suitcases, people, trolleys, bags and parcels. Suddenly she wags her tail and sits down in front of a large suitcase. Olivia asks the owner of the suitcase to open it for inspection. Inside she discovers boxes of prepackaged food. The dog receives her well-earned treat and lots of praises with it. She advises the tourist to declare the food items at customs where it may be confiscated.

In any month, a detector dog team at an airport could be expected to intercept about 33 kilograms of fresh fruit and nine kilograms of meat, as well as plant material and eggs. In a bid to tighten control and prevent the world's worst animal diseases such as avian influenza, quarantine detector are currently also employed at seaports, mail centres and private couriers' depots where they sniff out more than 30 different prohibited quarantine items. Selby and Olivia are in the middle of their 4- hour shift and are about to inspect another flight which has just landed. Selby is wagging her tail excitedly, ready for the next adventure. Do you enjoy your work, I ask Olivia. "It's an awesome job!" she replies patting Selby.

Travellers to Australia can log-on at the AQIS website at www.aqis.gov.au before leaving home to find out what they can and cannot take to Australia.
Posted by Ori Golan at 16:30

Thanks for sharing in detail. Your blog is an inspiration! Apart of really useful tips, it's just really ! This post will be effectively Just about everything looks good displayed.
___________________________
Dog trainers Memphis